We met in August 2019 with Bryce Scofield, General Manager for the Tunnelling Division and Cody Boykin, Precast Engineer, both working for TRAYLOR BROS INC. Having come to our production facilities in France to check on their moulds for the WESTSIDE 2 project, Bryce Scofield accepted to sit with us and share his feedback on his collaboration with CBE Group. 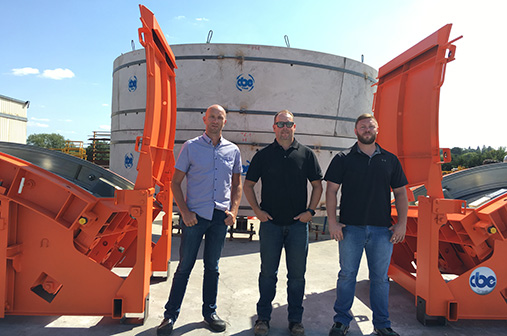 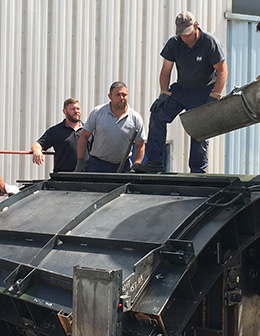 What is your career profile ? For how long have you been working for TRAYLOR ?

All in all, I’ve worked in tunnel for 14 years. I’ve been with TRAYLOR for 10 years, and prior to that, I worked on tunnel liner projects for a concrete company. I started off at TRAYLOR as Project Manager, and now I’m running the Tunnelling Division as the General Manager.
Cody, who’s with me today, is relatively new in the company, he’s been with us for 5 months. We’re training him as a Project/Plant Manager, he will gradually step up and have more duties : from running the operation to estimating and bidding the work, trouble shooting, everything really.
TRAYLOR BROS has 250 full-time employees. The Heavy Civil Division does bridge work, marine establishments, dams, and the Underground Division takes care of tunnelling. Precast is one of its subsections.
In my job, I do travel a lot, on average one to two weeks per month. We operate two facilities : one in Southern California and another one in Northern California. I bounce around between those, and in-between the projects, I do trade shows, demo ring visits...

How long have you known CBE Group for ? How would you define your work relationship with the company ?

I’ve known CBE Group for 10 years, our working relationship is very good. I would say that it’s almost like a friendship with Julien Travers, CBE Sales Director ; it’s very easy to work with him. There’s a high level of trust between us because we know that if there’s any issue, things will be moving forward anyway.

Should there be only one CBE-TRAYLOR project that you remember, which one and why ?

Everything is kind of unique, there’s always something different.
I arrived at the end of the UPPER NW INTERCEPTOR project. I didn’t run it, but they hired me on and I started learning the TRAYLOR systems. Then I ran the BAY TUNNEL job, and after that WESTSIDE 1, WESTSIDE 2, WESTSIDE 3, and then the specials for WESTSIDE 2 and WESTSIDE 3. Right now, it’s very complicated, there’s lots of different things going on.

Is there a WESTSIDE 4 in the works ?

Not yet, but there’s a possibility. This is an LA project that’s going through Hollywood towards the ocean, each step is getting closer and closer to the ocean, so the last one would be to the ocean because WESTSIDE 3 finishes only a couple of miles before. There’s not much left to go.

Not yet. We are done mining and tunnelling. They had to excavate a station and take out some of the segments that tunnelled through initially, and so they will be working on the station for the next few years, then track the electrification, installation, inverts... So we’re still several years away from that first line being used.

These projects take so much time... You must be very patient !

Do you think CBE Group, as a French company, is as legitimate as American groups to work on American projects ?

Yes. We always get the question about « why can’t somebody else in the US make these moulds ? ». My response is that CBE Group makes the best moulds. TRAYLOR PRECAST has generally not gone anywhere else for their moulds.
Previously, I used other brands and don’t find their moulds as robust, as durable or as tighter tolerant. We have had some issues, obviously, with CBE moulds from time to time, but CBE does a good job of rectifying whatever problems we’ve had.

Would you recommend CBE Group ? Why ?

Absolutely. Generally, when we talk to engineers and we are inquired about what makes TRAYLOR what it is today, we answer that we use the best equipment. And we use CBE because they make the best moulds for the market.

If you could resume your experience with CBE Group in 3 words, which ones would you choose ?

Precise, responsive and trustworthy. When we work on a project and we know we are using CBE services for our carousel, whatever quote I have, I know it’s the final one. I know that I’m not going to get an additional charge.
To conclude, we like dealing with CBE. My boss, who I came in with and started working for, preached that CBE was « who we want to use ». I also have come to understand that CBE offers the best quality moulds for us to use.